Thank you all for visiting! Book Corner has now moved to its new site at https://www.bookcorner.us/. See you all there!

Posted by Ernest Dempsey at 9:16 AM No comments:

There are times when you come across books that are written from the heart, to be read with the heart, through the eyes. When I requested a review copy of Charles Tabb’s novel Floating Twigs (Gifted Time Books, 2018), I didn’t know it would possess my heart in its narrative from the first page to the last. It did.

In Floating Twigs, Jack Turner narrates what happened to him in the small town of Denton, Florida, in 1968 when he was twelve and rescued a starving dog that he named Bones. Being the son of poor and neglectful parents, he had to seek work for feeding Bones and paying for his treatment. Thus he met a few good folks who helped him out of kindness. But the nasty and hateful people around him soon started a gossip that would land him and his benefactors in trouble while leaving scars on his innocence.
Jack’s coming-of-age story, told in the voice of his child self, takes the reader to reflect on the fundamental traits of human character: our essential fallibility, the tendency to harm, and the strength to heal with love and kindness. The title “Floating Twigs” gets a sweet and thoughtful story of its own in the childhood experience of young Jack Turner letting twigs float in street rapids during the rain to see how far they go in the current.
Floating Twigs is enthralling in its narration, compelling in its plot, heartbreaking in its honest exploration of human indifference, heart-winning in its assurance of the good in humanity, and beautiful in its realism. It is one of those books that you don’t want to put down until the very last word. And when you do, it still stays with you.
To everyone who loves good books, you don’t want to miss out on this gem.
ISBN: 9781722104399
Barnes & Noble: https://www.barnesandnoble.com/w/floating-twigs-charles-tabb/1136735042
Posted by Ernest Dempsey at 10:09 PM No comments:

What is a poem and how does one respond to it? This question is deep and it takes a Stanley Burnshaw to explore it inside-out, reaching the nooks and corners of thought where others haven’t before. Burnshaw takes us there in his 1970 book The Seamless Web.
In the three main sections of the book, Burnshaw moves from the psychological-linguistic context to

cultural-existential perspective and on to the artistic components (object, reader, and encounter) to present his case for a literary-philosophical analysis of poetry. The existential component is central to his thesis of the human organism in all its evolutionary scale responding a whole to the poem. In Burnshaw’s work, a poem is not just words and language but a more complete package of meanings that address the entirety of being.
Expect lots of references and citations in The Seamless Web as well as commentary on technical aspects of selected excerpts from verse by some of the most celebrated poets of various literary periods. Burnshaw loves to show what he is talking about albeit in a condensed manner characterizing a poet-philosopher. Endnotes accompany each chapter accordingly.
The Seamless Web is the book that gives you a new concept of poetry, critic, and the reader. It’s a gem for philosophy and literature students of moderate to advanced level, particularly to students of poetry and ontology.
ISBN: 0807605344
AbeBooks Page: https://www.abebooks.com/9780807605349/Seamless-Web-Stanley-Burnshaw-0807605344/plp
Posted by Ernest Dempsey at 10:48 PM No comments:

Rising from the Dead

We tend to think of medicine as a profession that saves life. But not many of us know that countless doctors working in the medical field themselves are dead—not physically but psychologically, morally, spiritually, and even professionally. You get a glimpse of the inside world of the medical profession after you read Suzanne Humphries Rising from the Dead (2016).

In this autobiographical account of her life, Dr. Humphries tells her story of getting trained as a nephrologist and practicing medicine at the hospital with the core value of the medical profession at the heart of her work: the safety and wellbeing of her patients. But what she witnessed at the hospital became an awakening call for her: a number of medical doctors and the hospital administration putting patient safety and wellbeing at risk while believing they were doing their best.
Dr. Humphries tells how her efforts to do things honestly and staying true to her profession made her the target of hostility by her colleagues and employer. At the core of this hostility was her professional obligation to report adverse vaccine reactions and health effects of vaccination her patients suffered; but the medical administration did not want her to question vaccines no matter what.
The book is written in engaging first-person narration that emanates courage, honesty, and commitment to the author’s profession of saving lives. The metaphor of rising from the dead is applied convincingly to illustrate how “gold standards” applied across medical facilities stifle real professionalism in doctors and reduce them to automatons resistant to learning and independent thought. The result is more patients left dead or injured with scars for life than saved.
While Rising from the Dead is not a book that you can use as a health guide for treating diseases, Dr. Humphries offers a number of important hints and pearls of wisdom on the safer and more healthy approach to a number of serious diseases and health risks. What makes this book a gem, though, is its immense inspirational value that calls for waking up from the grave of ignorance and servile compliance to a new life of awareness and the courage to question.
ISBN: 9780692648186
Barnes & Noble Page: https://www.barnesandnoble.com/w/rising-from-the-dead-suzanne-humphries-md/1123940669
Reposted from Word Matters!
Posted by Ernest Dempsey at 4:57 PM No comments:

If I hadn’t read Naomi Ragen’s Chains Around the Grass, the title “The Saturday Wife” would have been a turn-off enough to make me pass on this book. Who wants to read about another wife/woman/girl story, which sounds like all about how to win her husband or any other man (men)? Not me! But because I was already convinced of Ragen’s magic as a writer, I had to pick it up. And I am glad I did.

The Saturday Wife (St. Martin's Publishing Group, 2008) is a character-driven story of a young Jewish woman who tries to find an ideal place in her community through good marriage and thus becomes a rabbi’s wife. However, her worldliness starts failing her position in the orthodox Jewish environs and build up to become a disaster for herself and her husband. In Delilah Glodgrab, and later Delilah Levi, Naomi Ragen has created a character that reflects the socio-cultural vibrations of orthodox Jewish faith afloat in the sea of contemporary urban society in the developed west.

The story proceeds amusingly as Ragen maintains the fun side of Delilah’s journey through life. It doesn’t get dark and gloomy despite every opportunity for Delilah to turn it that way. In fact, her ability, supplemented by chance, to wiggle out of trouble itself becomes an amusement for readers.

The ending perhaps is a bit anticlimactic and far from cathartic. In character-driven stories, the ending is supposed to come from within the character with spontaneity and sums up the character’s development. That doesn’t happen in The Saturday Wife and readers may feel kind of lost or abandoned at the end. Nevertheless, it’s a story that has a moral side, engaging narration, interesting characters, and some good faith/cultural knowledge for non-Jewish readers.

Reposted from Word Matters!
Posted by Ernest Dempsey at 11:13 AM No comments:

The Field: The Quest for the Secret Force of the Universe

There are books that you read and you get a whole new worldview owing to the nature of information contained and the excellence of narration via which the information is conveyed. Award-winning journalist and author Lynn Mctaggart’s The Field (HarperCollins, 2008) is among those books.

Written for the average educated reader, the book explains key concepts in science, particularly in unscientific by establishment science.
atomic and quantum physics. The author summarizes the details of important research studies carried out to explain the presence and influence of the fundamental, all-encompassing Zero Point Field—hence the shortened name The Field. Many of these studies, involving carefully designed lab experiments by dedicated scientists around the world, revealed scientific evidence of the Field and validity of several paranormal or out-of-ordinary observations and experiences that mainstream science fails to grasp, and hence refuses to accept: remote viewing, telepathy, distant healing, and many other phenomena that are usually tossed in the bin labeled

Mctaggart tells the story of the research as well as the researchers in each chapter while also adding adequate historical background to give the reader the complete meaning of the scientific investigation being discussed. This makes her presentation of the case for the Field quite compelling. Of special interest to any critical and analytical reader would be the lack of attention all this groundbreaking research has received over the decades, pointing to the hand of establishment and self-interested authority in the realm of academic science that is intolerant of challenging works breaking with their established scientific view of reality.

The Field is at its core a science book, and to this writer, it’s a must-read.

Reposted from Word Matters!
Posted by Ernest Dempsey at 10:10 AM No comments:

David M. Friedman’s Wilde in America (Norton, 2014) serves a filling account of Oscar Wilde’s historical trip to America and its implications for both Wilde and America.

Starting with Wilde’s arrival in New York in January 1882, Friedman narrates in rich detail the nearly year-long journey of Wilde through the United States where he took the center stage not so much in literary circles as becoming the object of media’s obsession and an attraction for local elites, particularly women. Hence, concludes Friedman, Wilde virtually became the originator of modern celebrity culture in America while he lectured across the U.S. on the aesthetic movement in art.

Wilde in America has good deal of history of the American society of the time and the author blends it pretty smoothly with Wilde’s life story. It’s a travelogue, history, biography, literary arts, and cultural study—all in one continues story. Those having a reading interest in any/all of these would find this book a good pick.

Reposted from Word Matters!
Posted by Ernest Dempsey at 6:47 PM No comments:

Hiding in Unnatural Happiness by Devamrita Swami is a fairly short book of essays and commentary that explore the foundation of happiness. The author introduces readers to the nature of happiness, its various levels in human life, and the path to a life of true happiness—all in the perspective of spiritual philosophy of Hinduism. 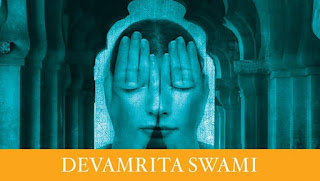 Swami distinguishes between the entrapping materialistic approach to happiness, which is what many people today adhere to, and the liberating spiritual approach to happiness, one that comes with the true knowledge of our place in the universal scheme of things. His commentary moves though the fields of economy, psychology, society/culture, philosophy, and personal wellbeing in order to illustrate the different levels of our awareness that determine the kind of happiness in our lives. Here you see a special emphasis on practicing yogi lifestyle for attaining contentment.

The chapters in this work are short and some chapters are expanded versions of the author’s presentations at various educational institutions. Swami’s language has a pleasing, aesthetic feel to it. With a length of around a hundred pages, Hiding in Unnatural Happiness is a decent pick for lovers of short books that offer some pearls of wisdom.

Reposted from Recovering the Self
Posted by Ernest Dempsey at 9:07 AM 1 comment:

Read inspiring stories about death and its meanings in life in The Blue Fairy and Other Tales of Transcendence. Click on the image to view the book at Amazon.